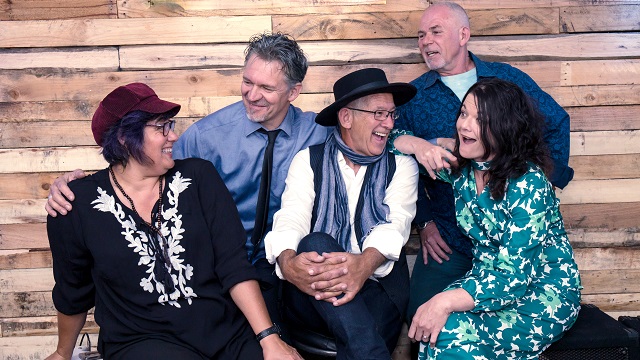 Rumours of Fleetwood Mac is a tribute show centered around one of Fleetwood Mac’s most successful albums Rumours (1977) that spent 31 weeks at No 1 on the Billboard charts. Rumours remains a candid songwriting triumph that cemented Fleetwood Mac’s status as one of the greatest rock bands of all time.

Featuring a full band made up of some of Cape Town's top musicians, Rumours of Fleetwood Mac takes the audience into an audio landscape filled with ‘classic time-capsules of memories’ with tracks like Go your own way’, ‘Don’t Stop’, ‘Dreams’, ‘Everywhere’ and ‘Second hand news’.

The earworms of Fleetwood Mac scattered throughout the show are guaranteed to have you smiling, foot-stomping & singing along to these iconic music gems.

Upcoming event: watch this space for the show's first date in 2020!

Take a look at the promo video HERE

Skye Wilson’s incomparable lead vocals drive the show backed by her exciting rhythm guitar work. She is no newcomer to the South African music scene, having formed The Sunshines with Greg Schoeman in 1993. The Sunshines recorded and independently released their debut album “Removeable Tattoos” (available on iTunes, Google Play, Deezer and Amazon) at Shifty Records in 1994 and dominated SA’s national and regional airwaves with their contagious, feel-good pop tunes which included the hits “Wanna make love”; “Happy Person” and “Judy”. Skye’s first album, Transformme, released in 2013, is a dreamy and somewhat indefinable collection of songs, stories and recollections, available for download on iTunes, Google Play, Deezer and Amazon.

Greg Schoeman (electric guitarist and vocalist ) is a professional, experienced and diverse guitar player and vocalist. His style ranges from pop/rock to blues/soul with a drop of African thrown in for good measure. Along with Skye, he founded The Sunshines in the 90’s. He also plays for the popular Fancy Galada Band. Greg recently released his self penned album called "In My Street", available for download at iTunes, Google Play, Deezer and Amazon.

Wendy Van Rensburg’s exciting keyboard playing has ensured her a busy career as a freelance musician. Not only has she written and produced two cabarets, written and composed music for various clients, including Sun International, she has also performed in some highly acclaimed productions, including "Girl Talk 007" at The Sound Stage.

Anthony Kinsey is the band’s bass player and adds his distinctive vocals to the mix. He founded the original band 'Juliet Jade' and recorded with Louise Carver before moving onto the show band circuit, playing bass for James Marais's Elvis tribute and a successful Bee Gees tribute tour.

Drummer, Malcolm Cassisa is the fifth and final band member, a versatile and solid groove keeper. Although he has played in various bands and musical genres from Country Rock through Jazz Funk, he is best known for his work with local Cape Town function band, Tuxedo.

Fleetwood Mac, (a name synonymous with great music) is a British-American band formed in London in 1967. To date, they have sold more than 140 million records worldwide, making them one of the world's best-selling bands of all time. In 1998, select members of Fleetwood Mac were inducted into the Rock and Roll Hall of Fame and received the Brit Award for Outstanding Contribution to Music.

This show is perfect for both venues and corporate events.